The past few days I've been leading tours for the Texas Butterfly Festival and the Rio Grande Valley Birding Festival.  Today I was co-leading with some heavy hitters from the birding world.  There was Jon Dunn, author of many birding field guides including the National Geographic Birds of North America, Sophie Webb who illustrated the Mexico field guide and George Armistead who is events coordinator for the ABA.  We had a busload of 34 birders who was anxious to see some lifers at our first desrination, Anzalduas County Park south of Mission.  We were doing pretty good with Northern Beardless-Tyrannulet, Gray and Zone-tailed Hawks, Black Phoebe and Green Kingfisher when we got a call that an Amazon Kingfisher, second record ever for the US, had been found on a resaca on TX 100 just east of US 77.  Though the temptation was strong to take the whole bus load over to see it, we continued our tour to the UTPA campus where we found the wintering Painted Redstart and a bonus Black-throated Gray Warbler.  Both were lifers for many of the tour participants.

With our duties complete, we drove back to the Convention Center in Harlingen and the leaders were complementing the driver for a job well done as we arrived.  As if to show us one last example of his driving expertise, the driver made a big looping U-turn with the bus to the unloading area and in the process almost wiped out Kenn Kaufman and his wife.  Woops.  Upon  arrival many were quick to sprint to their car and race over for the kingfisher.  When I arrived at the site, I discovered the bird had not been seen for over an hour.  After another fruitless hour, the Amazon Kingfisher was finally sighted and I had the good fortune to have found a lookout near a snag it chose to land on.  Through the willows I got this poor shot. 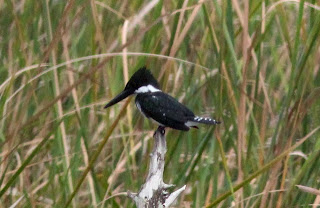 After a couple of quick photos, the bird took off again to another part of the resaca where is was quite distant but visible through scopes.  Overall, several hundred people were excited to add Amazon Kingfisher to their ABA lifelists.  As far as I was concerned it was just a new bird for my Cameron County list as I had the good fortune to see the Laredo bird several years ago.


Posted by Antshrike at 7:48 PM No comments: