After several days of getting caught up on yard work after our Australia trip, I thought this morning would be a good time to visit the wet spots in eastern Hidalgo County.  There were lots of birds but nothing exciting at the Sugar House Pond.  High water and no birds at Delta Lake and lots of Western Sandpipers but not much else at Hargill.  So I figured I would head up Brushline Rd and walk into Sal del Rey.  At least I could get some excercise.  Well, no sooner than I crossed the gate, I saw a flock of Wild Turkeys crossing the track ahead of me.  They've been hard to find during this very dry year. 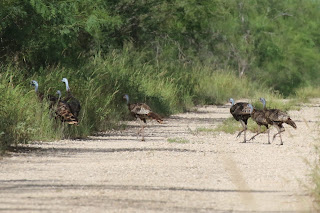 Well I needed them for my county list for the year so that already made the trip worthwhile.  Then a small flock of passerines caught my attention.  There were two Yellow Warblers and a Blue-gray Gnatcatcher.  I thought there was more so I whistled some Ferruginous Pygmy Owl toots and was rewarded with my first ever Northern Beardless Tyrannulet at Sal del Rey.  Looks like it's sprouting some new rectrices. 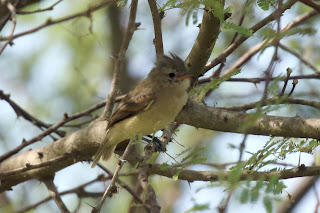 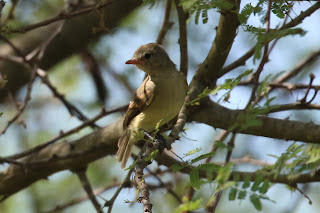 I stopped whistling while I photographed the tyrannulet and noticed I still heard "poip poip poip..." and it wasn't in my head.  There was a Ferruginous Pygmy Owl calling across the road.  This is probably the same owl that's been seen up and down Brushline Rd over the past two years.  So I managed this poor photo. 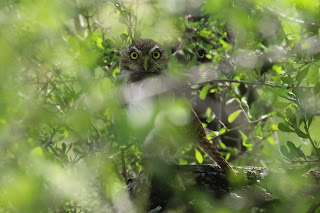 The owl moved and with the help of scolding Black-crested Titmice I relocated it and worked to get some better shots through the brush.  This is only the second time I've seen Ferruginous Pygmy Owl on Brushline Rd. 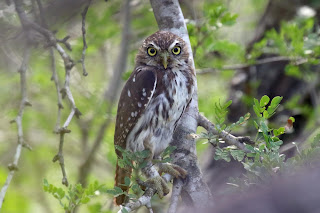 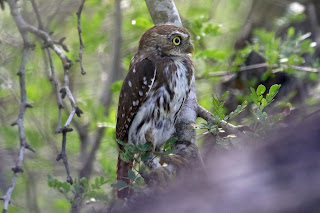 Here's one of the titmice. 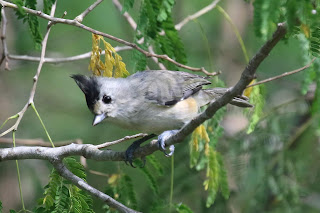 Also with that first passerine flock was this Myiarchus flycatcher.  Though the gray seems pretty dark, it lacks the reddish base of the bill of Great Crest Flycatcher so I think it's just a fresh Brown-crested Flycatcher. 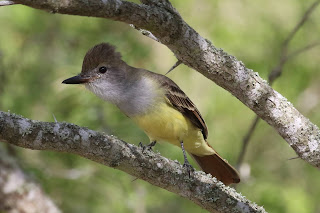 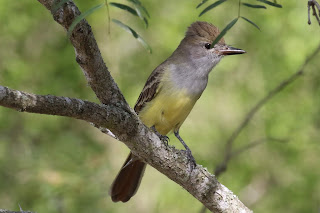 I made it down to the freshwater cienega seeing little else but Bewick's Wrens.  The cienega looked great.  The refuge staff has done a great job of bringing the wetland back to life after it was destroyed by drought and feral hogs. 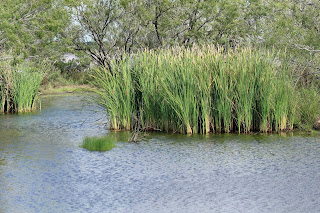 I heard a Cactus Wren calling so I "chugged" back at it.  It flew in to check me out. 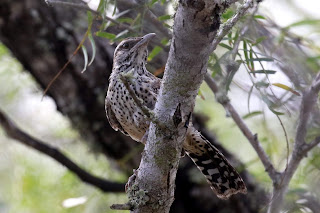 Otherwise nothing but Common Ground Doves and Mourning Doves.  Water was low in the salt lake and I only saw a few Least Sandpipers and some distant gulls.  I saw the turkeys again on the way out. 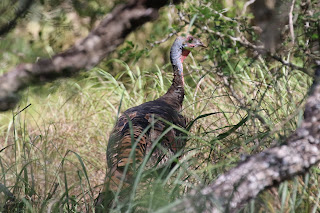 Not quite what I had planned but a great morning!

Posted by Antshrike at 7:21 PM No comments: