This past Saturday the fifth Texas record of Snail Kite was found at Flag Lake in Lake Somerville State Park in Lee County.  Most ABA birders know them from the Florida population know as Everglade Kites.  But Snail Kites also occur from central Veracruz in Mexico ranging far south into South America.  I've seen many in Mexico but have always wanted to get one for Texas.  I didn't hear about it till Sunday morning so I loaded up the car and got off about 10:30.  After geting as far as Odem, about 150 miles, I saw post on Facebook that the Snail Kite had soared up the with vultures and had disappeared at about 9 am.  Why the experienced birders on site waited so late to post this is beyond me and it really pissed me off.  That combined with the fact that past couple of Snail Kites have been one day wonders moved me to turn around and go home rather than continue the hot 350 mile journey.

I felt a little better on Monday as the Snail Kite was not seen.  I had saved myself a lot of driving and money!  But Houston birders, David Sarkozi and John Berner, didn't give up so easily and refound the bird on Tuesday.  So I got up dark and early Wednesday and was off by 3 am.  I arrived at the site at a little after 9 as hot but happy birders arrived back at the parking area with Snail Kite added to their life lists.  I made the hot one mile walk accompanied by a fellow retired high school AP teacher.  He taught AP Biology whereas I taught AP Calculus but we still shared a lot of positive thoughts on the College Board AP program.  When we arrived at the northern side of Flag Lake, a few birders wer still present and put us on the distant Snail Kite.  It was great to finally see one in Texas but the distant views were underwhelming.

As the small group started leaving to beat the worst of the heat, a pair of late birders showed up and I stayed to help them find the bird.  My good deed was rewarded with much better views.  The birders were happy and left.  I stayed by myself a bit longer to chase dragon flies and was the recipient of the best view of all. 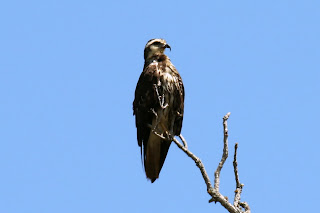 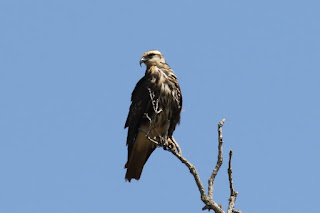 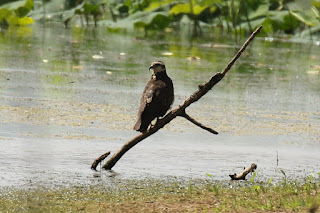 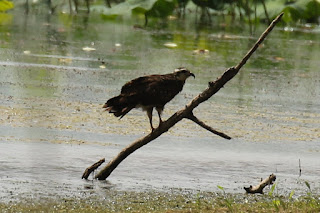 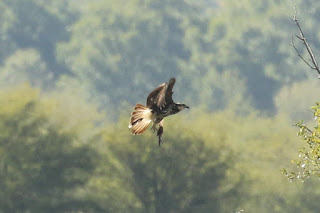 Also present at the site was a family group of Mississippi Kites, adult above and youngster below. 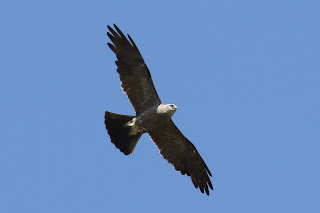 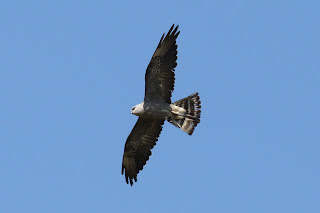 Keeping with the kite theme, this morning I was checking out the birds in our Progreso Lakes yard and guess what I found.  This very distant south bound Swallow-tailed Kite was our first ever for July and seventh record overall. 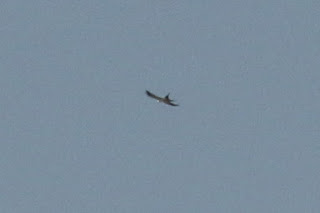 It may be hot and nasty but there are birds out there to be found.
Posted by Antshrike at 3:16 PM