I spent the morning yesterday birding in the yard and not seeing much new.  The Purple Gallinule was down in the corner by the water intake but it didn't cooperate for photos.  So after a while I was done and ready to take Honey to the gym in McAllen.  I was planning to go donate blood and maybe buy a few plants for the yard.  And then the WhatsApp dinged.  Peggy Rudman had just posted a beautiful photo pf a female Flame-colored Tanager at the South Padre Island Convention Center.  I've seen only two of these in Texas, both at Big Bend, so it would be a new RVG bird for me.  So plans changed and I was off to SPI.  When I arrived I saw a small group looking at something in the big loop in front of the Convention Center.  In a few minutes I was looking at my first Flame-colored Tanager for Cameron County, bird #418.  This is thought to be a female of the east Mexican subspecies.  I think it's the fifth record for the Valley and the third for South Padre Island. 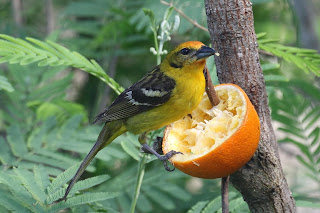 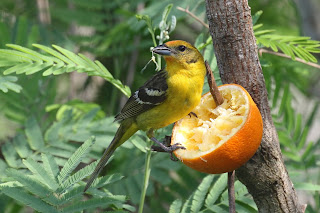 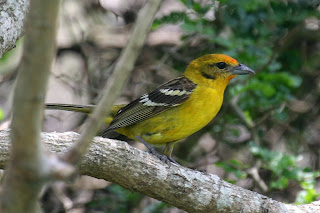 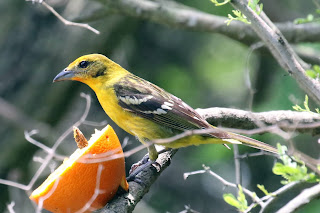 Otherwise there were a few warblers and other migrants around.  I was photographing this nightjar which later flew and proved to be a Lesser Nighthawk.  At one point a Great-tailed Grackle got too close and the Lesser Nighthawk didn't like it. 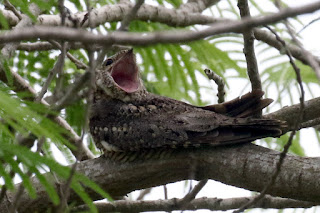 I got a poor photo on a Virginia Rail from the boardwalk.  That is a species I've heard on the Island but never seen. 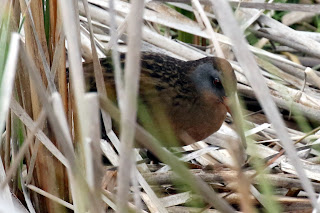 A Yellow-green Vireo was also photographed on the island but I could never find it.  It might hang around for a while.  So anyway it was nice to finally be successful on a chase after so many recent failures (Garganey, Black-capped Vireo, Long-tailed Duck, Morelet's Seedeater, etc.)