The day before yesterday a Cassin's Kingbird was photographed on South Padre Island.  This southwestern species is one I've wanted to see in the Valley for a long time.  Unfortunately I got word late in the day and had to make my attempt yesterday morning ahead of an approaching rain storm.  I got out there a little after eight but could not find the Cassin's Kingbird.  There were a couple of Eastern Kingbirds but not much else.  I was not too surprised as kingbirds to not tend to hang around long during migration but I had to make the attempt.  Checking the weather app on my phone I saw the storm was quickly approaching.   After checking the power lines and palms to the north I decided to give up and make a run to Sheephead before the rain came. (Futher examination of the photos proved the kingbird to be a very dark Western Kingbird.)

There were not many migrants at Sheepshead either.  The sky was getting dark and spitting a few drops while the wind picked up.  Then I spotted a couple of kingbirds clutching the tall powerline along Laguna Boulevard.  I raised my binocs and saw the expected Eastern Kingbird along with one that looked a little different.  It was paler and seemed to lack the characteristic white tip of the tail.  Then and icy gust of wind blew them off the line and it got dark, wet and cold.  I tried to search for the strange kingbird but I could barely see.  So I gave up and thought to myself "I'm going to be pissed if someone finds a Gray Kingbird tomorrow."

Well..... Molly Smith, a volunteer at the South Padre Island Birding and Nature Center, found a strange kingbird today and after studying the field guide, told naturalist Javi Gonzalez that she thought she had seen a Gray Kingbird.  Javi photographed it and got the word out and an hour and a half later I was looking at one of my most wanted birds for Texas, a Gray Kingbird!  Gray Kingbirds occur in southern Florida and thoughout the Caribbean.  They occasionally wander to Texas.  I've unsuccessfully chased two of them.  Kingbirds rarely stay.  This was the second for South Padre Island.  For me it was bird #589 for Texas and #419 for Cameron County. 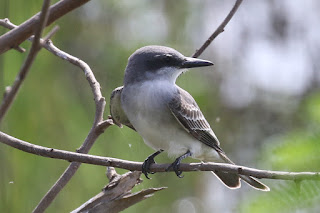 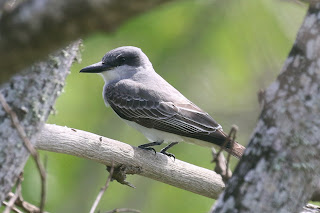 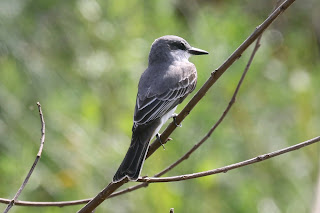 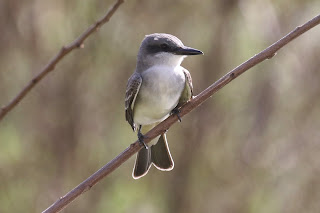 I'm not saying this was the bird I saw yesterday but stranger things have happened.